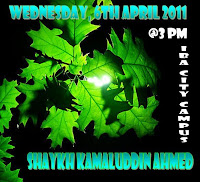 The IBA Iqra Society invited Sheikh Kamaluddin Ahmed on 6th of April, 2011. The following is the summary of the talk on ‘Qabiliyah and Qubooliyah’.

Please note that the following is not a transcription but only notes based on personal understanding.

“And whatever good they do – never will it be removed from them. And Allah is Knowing of the righteous.” [3:115]

An action has two dimensions:

Qabiliyat is skill, proficiency, talent, articulation and expertise with which an action is carried out while to be Maqbool i.e to have Qubooliyah is to be loved, accepted and be pleasing to Allah (SWT). It is not necessary that these two things will go hand in hand. Infact, events throughout the history have shown that these two things often are separate.
Let us take a look at a few examples;

Iblees, although a Jinn, was so qabil that he was granted the suhbat of the angels by the Will of Allah (SWT). Such was his qabiliyat in worship that he could see, hear and be in the presence of Allah (SWT). When Allah created Hazrat Adam (AS), He called all the angels to witness the creation of His wali on Earth. Amongst these angels was Iblees as well who had perfection, 100% qabiliyat in his worship but who, despite of hearing a direct command from Allah (SWT), did not obey it. 100% Qabiliyat, zero Qubooliyah. Iblees was mardood as opposed to Maqbool. Mardood means to be rajeem, rejected, repudiated.

Firoan was another epitome of perfection. He was so qabil as a ruler that nobody protested against his law of killing every male boy born to a woman in Bani Israel. He deemed himself a perfect king and insisted on being looked upon as the lord of his people; but all his qabiliyat could not save him from a dreadful end. While drowning in the sea, he finally accepted that there exists a Rabb, the Lord of Hazrat Musa (AS). Alas, it was too little, too late. 100% Qabiliyat, zero Qubooliyah. All his life he ran after qabilyah and at the last moment he thought about qubooliyah. Isn’t this exactly what we do? We waste half of our lives acquiring fancy degrees, winning accolades, attending workshops on how to score high on University entrance tests and/or internship tests and hardly ever have a second to spare to think about the qubooliyat of our few righteous actions.  If the years and years of perfect Ibaadah by Iblees could not save him from becoming a rajeem by disobeying one commandment of Allah (SWT), can our few thousand imperfect sujood be enough to save us from our zillion sins?

Another example is of Abu Jahl and Abu Lahb, two well-known, rich leaders of the Quraish. They both knew that Holy Prophet (SAW) was the Prophet of Allah (SWT), they both had yaqeen on him but still they did not accept Islam. The truth looked straight in their eyes but they chose to look the other way. Their worldly status, their shaan-o-shaukat, could not save them from becoming rajeem. For such people Allah (SWT) says,

The flipside of this is to become Maqbool without having qabiliyah. It is possible to have qubooliyah with zero qabiliyah. For example, the rock, Hijr, said salaam to the Holy Prophet (SAW) and the Holy Prophet (SAW) replied back to it. Similarly, in another Hadith, the Holy Prophet (SAW) said that he loved mount Uhud and Uhud loved him. Now if we look at Hijr or Uhud, they appear to be simple and not at all extraordinary. If you have the honor to go to Uhud, you’d realize that it isn’t big enough to be called a mountain. It is a small hill with no trees, no vegetation (not a sight fit for a postcard); YET it is loved by the beloved of Allah (SWT). A rock and a mount with no aqal, no extra-ordinary characteristics, having zero qabiliyat but bestowed with 100% qubooliyah. Can we, being insaan, the ashraf-ul-makhlooqat, the ummati of the leader of the Prophets, say with confidence that the Holy Prophet (SAW) loves us? Look at the Kaaba, Bait-ullah, made out of plain stone – no gold or diamonds, simple architecture i.e. no qabiliyah but it’s status is such that Salaah offered there is 100,000 times more rewarding.

The following Hadith can be taken as another example of zero qabiliyah and 100% qubooliyah.

The Prophet used to stand by a tree or a date-palm on Friday. Then an Ansari woman or man said. “O Allah’s Apostle! Shall we make a pulpit for you?” He replied, “If you wish.” So they made a pulpit for him and when it was Friday, he proceeded towards the pulpit (for delivering the sermon). The date-palm cried like a child! The Prophet descended (the pulpit) and embraced it while it continued moaning like a child being quietened. The Prophet said, “It was crying for (missing) what it used to hear of religious knowledge given near to it.”

Thus an ordinary date palm tree, providing shade to the Holy Prophet (SAW) could not bear to be distant with him while we, his ummatis, with aqal and sha’oor, are far away from his teachings. Our qabiliyat lies in the matters of duniya. While pursuing this worldly qabiliyat, we have pushed away qubooliyah as well. We try our best to please those around us. While going for a job/internship interview, we go prepared, look up the company’s history, the mission and the goals and for a few hours, synchronize our personality with that of the company’s so that the interviewer thinks that we are compatible with the company’s profile. Not once we do we stop and even try to think to mould our lives in a manner that is pleasing to Allah (SWT) such that when Allah (SWT) looks at us He says, ‘Yeh tou apna banda hai’. If you make yourself for Allah (SWT), Allah makes makhlooq pleasing to you.

Another example is that of Hazrat Bilal (RA), who was a freed slave, was illiterate, belonged to the lowest socio-economic class, was not attractive and did not had the most beautiful voice in the whole of Madinah, yet he was chosen to be the Prophet’s (SAW) mu’azzin. It was his Azaan that rung in the Prophet’s (SAW) and Sahabas’ ears. It was his ‘Allahu Akbar’ that preceded the Prophet’s (SAW) reply to azaan. When Holy Prohpet (SAW) went for Mairaaj, he saw footprints. He asked Jibrael (AS) whom did the footprints belong to. Jibrael (AS) replied, ‘That Bilal of yours, O Prophet Muhammad (SAW), is so pleasing to Allah (SWT) that although he walks on earth, but his footprints get imprinted on the skies!’

If we look at Hazrat Bilal (RA), outwardly he seemed ordinary with no qabiliyat but in the eyes of Allah (SWT) he had qubooliyat. The fact is, not all of us can attain 100% qabiliyat. As much as we aspire to become future CEOs, yearn to become perfectionist in everything we do, very few of us, if any, would be able to achieve that. However, every single one of us has the capacity to become 100% Maqbool through Taqwa, Ibaadah, Sunnah, Dhikr and Suhbah.

« Sins of the tongue
Khilafat: The solution to Pakistan’s problem? »

Sins of the tongue